a jungle interlude... (a solo game played trying out my Simple Combat rules..)

In the Sultanate of Nambuzo, at the fort near the trading post of Polinpopo; the officers await anxiously as a patrol is overdue...

The patrol on the way back to the fort....

they cross the small stream .... 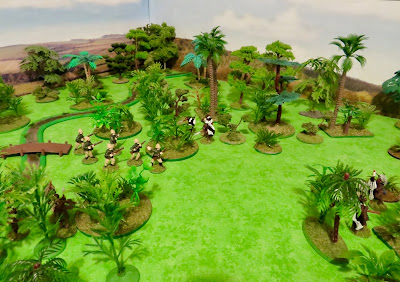 suddenly - ambushed ! they fight for their lives .... 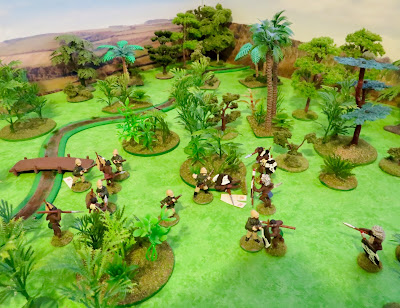 the seargent and one of the soldiers manage to get somewhat away from the melee... 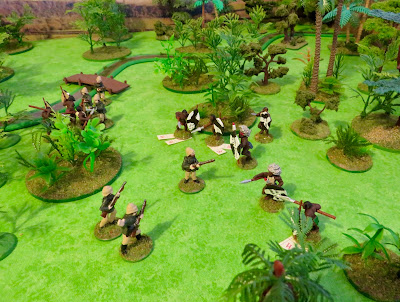 With time to fire, the seargent shoots the leader of the attacking warriors ... 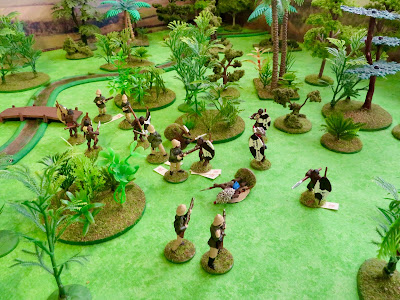 The seargent and the soldier fall back further, their firing deters the warriors from attacking them 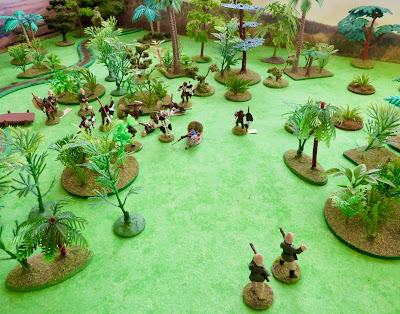 the rest of the patrol fight on but they will eventually be surrounded and killed ... 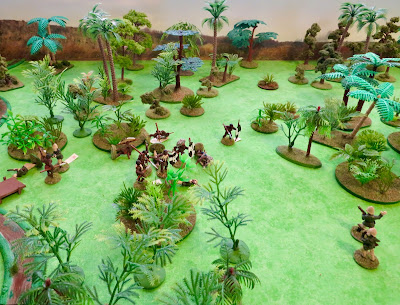 The seargent and the soldier finally get back to the fort ..... 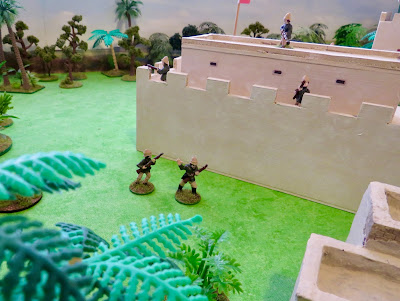 Professor Loft looked at his watch, it would be a long twelve hours before he could make his escape.

Quickly he checked the door, Yes, his Jailers had been careless again, and left the key in the lock, The old newspaper and teaspoon trick would get him out of the room. Then creep quietly down the stairs and out of the front door, down the street, then a quick walk to Shepherds Hotel, where he knew his daughter would be staying.

From beneath his mattress he pulled copies he had made of entries in the Scroll of Sven that he had been required to translate for his captors.

The page they wanted showed an illustration of a buried chamber between two Sphinx statues. Each looked identical to the well known one by the great pyramid, but he knew of no location where two such statues had ever stood.

Within the chamber was shown a Rams horn trumpet and what seemed to be a parabolic bronze mirror.

It had taken a great deal of effort to decipher the text,  although written in Greek, it made no sense. Only when he realised that the language was Aramaic did he begin to unravel the mystery.

The tale told of 'The Voice of Ra' and seemed to describe something of great power, The power to move mountains or to destroy them.

There were further references to 'The Tongue of the Winged Serpent' and to 'The Giver of Light'    but directions and distances were given in 'Ells'.

Other pages showed what appeared to be The Golden Fleece, An unknown Archipelago, and a strange goblet covered in swirls and triskelions of script.

He would need to gather a team of experts to help decipher it all:

Professor Compani  would have been his first choice but had disappeared  in Africa some ten years previously.

Hamilton and Mumford would be good choices, or Gruber and Pechlivan, Young Denyer perhaps. There were others too.

As soon as he was free he would gather a team together to decipher the mysteries.

Many hours later, when all was quiet, The last ladies of negotiable virtue had gone home and the early morning workers had yet to rise. He made his move.

The door to his room gave no trouble, and with his few belongings and the precious document, he crept down the stairs.

No sound disturbed the silence as he reached the front door, Soon he would be able to breathe the fresh air of freedom.

Locked and bolted, no sign of the key. He turned and made his way to the back.

As he passed a closed door he could hear snoring, stopping to listen he could make out at least two people within.

Taking even more care, he made his way to the back. Again locked, with no sign of a key.

This had always been a possibility, and Plans C,D, and E had already been made.

Quietly back up the stairs, he entered his room, gathered the knotted sheets and made his way to the roof hatch.

His heart in his mouth, he unbolted the hatch, wincing as it squeaked open.

He paused for a while, but no sounds came from below.

Out, onto the roof, quickly to the parapet, he looked down judging the distance to the ground and looking for somewhere to anchor his homemade rope.

The only possible anchor was someway from the edge of the roof, looking down he would have to drop the last six feet or so. He would have to risk it.

Struggling slightly, he had spent too much time lately in dusty archives and not enough out in the field, he managed to clamber down. With a last look round he dropped, hoping against hope he would land safely.

Standing and dusting himself off, he was relieved to be unharmed. Quickly and quietly he made his way towards the river. He would wait by the Cafe Citron, until his old friend Abdullah arrived for his morning coffee, then make contact with Clara and plan their next actions.

As the sun began to rise, Cairo looked cleaner than he remembered it. 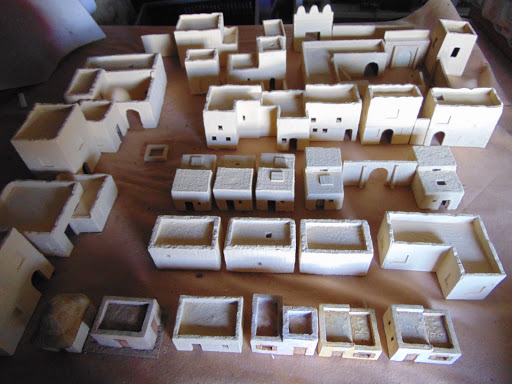 The game was played out with pencil and paper, using mechanisms borrowed from Black Ops and simple decision making formulae. ie left 123, right 456. With only two exceptions the professor defied the odds, but a recitation of he threw a 6 when needed, followed by a 2 when needed hardly makes for a riveting tale. He will henceforth be known as "Lucky Loft"
And will need all of that luck in the next episodes. 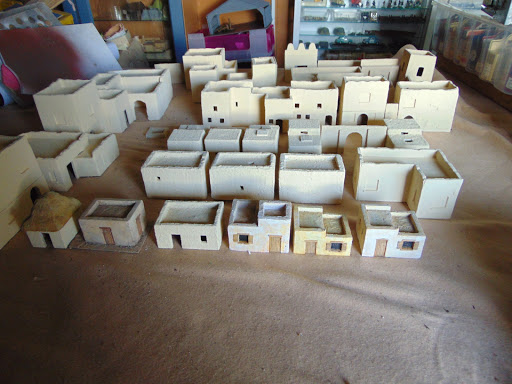