After briefing the League of Extraordinary Mental Men on the 'Rule of Six', along with the delivery of  relevant files and records, Sterling and Stirling took a well earned break in the country doing a bit of hunting. 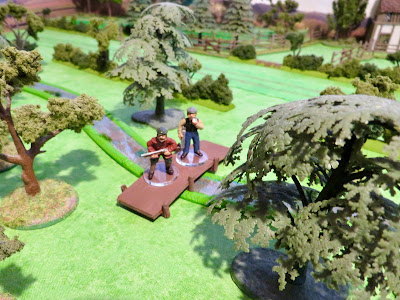 The league has been tasked with coming up with potential leads , identify candidates names for the members of the 'Rule of Six', trying to delve deeper and find more information on 'The Coordinator'. If possible provide some idea for the location of  'Krykoskos' (evil island).   The league are hard at work ....

Nice book find in a charity shop a couple of days ago, 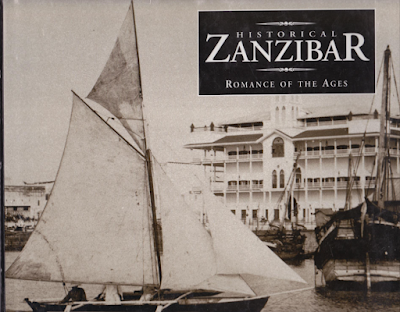 nice coffee table picture book, black and white photos.
---oXo---
Also found a nice website with info and pics of Zanzibar - including the short war in the 1896 and WW1.

The Sultanate of Nambuzo... background and games so far....

After the war the German's were stripped of their colonial empire,  German East Africa was split up among the winners of the conflict.  (see https://en.wikipedia.org/wiki/German_East_Africa ). In 1919 German East Africa was given over to Britain, who subsequently gave Ruanda & Urundi to Belgium (Belgian Congo); also a the Kionga Triangle was given to Portugal (Portuguese East Africa..later to become Mozambique).

"Tanganyika" became the name of the British territory.  Also Zanzibar had agreements with the British and nominally controlled a 10 mile strip of the coast line; however the British were really in control.  (see https://en.wikipedia.org/wiki/Sultanate_of_Zanzibar);
The Fictional Sultanate of Nambuzo (after 1919)

The Sultanate was given total control by the British of a 15 mile strip along the coast when it took over control of German East Africa, but the British stripped them of control of the coast strip north of Vanga (taking control of Mombassa).  The coastal strip and the Zanzibar Sultanate became known as the 'Grand' Sultanate of Nambuzo.

Most will be small scale games (early Inter-War 1920's) arsing from the following contexts:

The Sultanate of Nambuzo seeking to extend its influence into the Indian Ocean has seized the small french controlled island of Coromelle.  The French none to happy with this have pulled together a small force which left from Madagascar and has arrived at the island not far from the small port of Romoni.

Result: The french ejected the sultanate’s troops from the island.

The Sultan of Nambuzo wants to take control of the railway from the interior.  Attempting to extend their influence the germans have sent some troops to support the Sultanate of Nambuzo in this action - a small force of colonial troops and askari.  Aware of the the Sultan's intentions, the British have assembled a scratch force to defend the railway - comprising some Indian colonial troops, a naval landing party and some armed sailors.

Result: The Sultanate beats the British and takes control of the telegraph office, halt and bridge over the river.

Armed traders from the Sultanate of Nambuzo,  based at the trading post of Mutimbo, have been causing trouble in the adjoining British protectorate. Diplomatic efforts to stop incursions have failed. A small raiding force has been assembled to carry out a punitive raid on the trading post to deter further incursions.

Result: The British beat the Sultanate and destroy the trading post.

Armoured Car for the British ...

A Lanchester 6 wheeler... ready for service in East Africa, to thwart the ambitions of the Sultanate of Nambuzo. 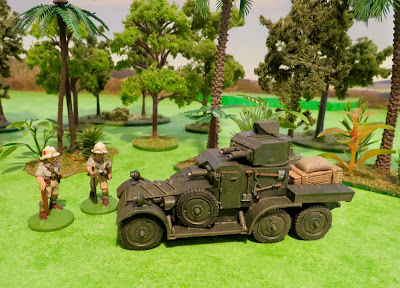