Francis Aloysius O'Donnel, was travelling up country to the mission of Saint Mary, loaded on his pack mule Mcguffin were urgent medical supplies for Sister Sarah.
When the two boats came into view he could see that they were in trouble, someone was bleeding heavily.
Swiftly he dismounted from his own mule, Muffin, and went to help them ashore.
A mixed party certainly, consisting of an elderly man, currently slumped unconscious and bleeding heavily, a classically beautiful young girl, a native man mountain, and a younger native boy.
His curiosity could wait, the old man was still breathing the important thing was to keep him that way.

The well built native lifted the old man out of the boat, and laid him gently on the ground, the girl proceeded to bathe the wound, whilst Francis opened up some of the medical supplies.
Together they managed to stem the bleeding and examine the wound, the bullet seemed to have entered the upper right side of his chest, hopefully missing any vital organs.

Having stopped the bleeding and examined the wound, it was agreed that it was too serious for any of them to deal with.
Communication between them was difficult, the only person with a common language was unconscious. 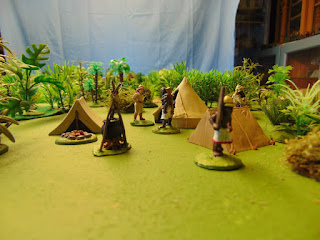 With the camp site set up, they discussed what to do.
Francis and Junior kept watch whilst Ser tried to explain that he needed to find some Kupotee, a plant, a poultice of which would relieve the pain and prevent fever from weakening the old man.
Francis explained that the mission was a full days travel up river and with night time travel highly dangerous, they would have to spend the rest of the day in camp before an early start the next morning.
He would spend two days travelling cross country. 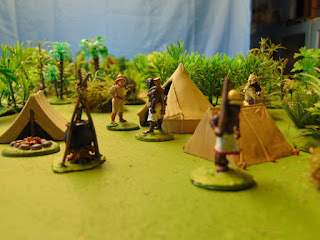 Ser and Junior duly set out to find the plant, known to his tribe as Panoseyah.
Whilst Francis and Sophia talked.
She found his brogue difficult to follow, and he found her English pronunciation rather quaint, but they managed some form of dialogue.

She told him of their quest, which he found an interesting concept.

He in turn told of his childhood in Dublins fair city, and although the reference to his nickname of sweet  f a, meaningless she did come to think of Frank as rather sweet. 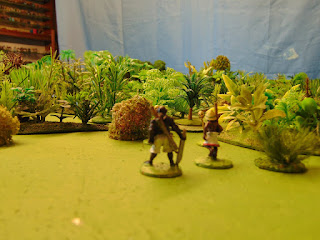 Ser and Junior had spent some time  searching, when they came across a juju sign barring the way. 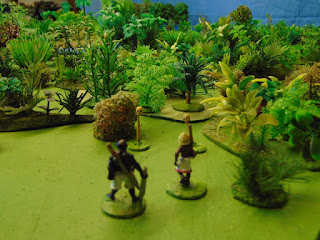 Warily, knowing that such sign was often reinforced with physical dangers, they circled the site. 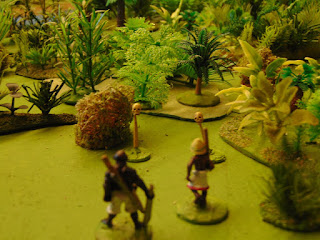 More juju sign barred their way and alarmed they turned back. 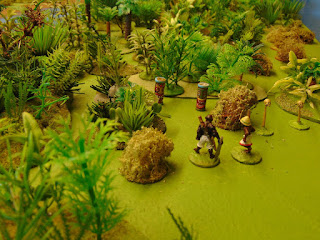 Frank and Sophia were anxiously awaiting their return. 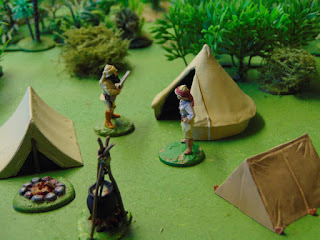 A rustling in the undergrowth had them reaching for their weapons and the alarm on their faces turned to relief when Ser and Junior stepped into the clearing,  clutching a bundle of green leaves.

Whilst Ser prepared the poultice and a drink made from the leaves he told them of his discovery and that they must leave as soon as possible, but accepted that they must spend what was left of that day where they were.

Night fell, an uneasy one for all.


The professor remained unconscious, the others remained awake watching the jungle fringes.

At some stage Drums started, the rhythym ,rising and falling, building to a crescendo which had them on edge before dying away then restarting.
Posted by Douglas at 23:23